The Hare and Hounds Boundary Run is a marathon skirting the edges of Cambridge city marked out with flour arrows along the way. It was my second marathon, but this time I was not competing, I was training. The point was to run in a race atmosphere, but keep my head – run my run, and pace myself for a 5 hour marathon time. This was in preparation for running 33 miles in 3 weeks time as part of a training weekend for the Hoka Highland Fling race (a 53 mile ultra marathon along the West Highland Way).

I massively screwed up. I did run the marathon in 4 hours and 51 minutes, but ran the first 10 miles as if I was on for a sub 2 hour half. I ran with Max’s Garmin, alerting me to my 1k splits and saw I was running sub 6 minute kilometres, something I rarely do even in training. But I ignored logic and reacted to my ‘chimp’ brain which was convinced I would come last if I slowed down. The problem was the majority of the runners in this race would finish at 13.1 miles, at my half way marker. I should have started at the back of the pack, not the middle.

Previous to this marathon I had sworn never to run amarathon again. However, I am so glad I did. I loved this course, the atmosphere and the people. Such a great race and nothing like what I experienced running a large event type marathon. The course was about 35% trail and had no road closures, but plenty of food and water stations with amazing volunteers. Once passed half way, the crowd thinned down as about 80% of the runners finished and us marathoners slipped off towards the fens. It felt amazing to keep going where every one else was stopping, like we knew something beyond what they knew. They had finished, we were half way.

The biggest difference in this race was the relaxed atmosphere, people were running, not for a time or a charity or as an exercise of their limits, but because they loved running. There were two best friends ahead of me that had obviously used the marathon as a way to catch up with each other. They took turns to tell each other a story from the past year they had not seen each other, their energy and exhilaration was up-lifting. I ran with a huge grin on my face having run my last 3 Sunday long runs alone, I felt so happy to be in a colourful moving pack. I found myself running with the same group of runners from about 12 miles in. One man had run 101 marathons and 6 ultras, one lady was running a marathon every other week until she hit 100 marathons and another was training to run 3 marathons in a row over the May bank holiday. As things got tough after 21 miles we all helped each to keep going, swapping stories of chocolate themed races and talking about our goals.

After finishing Max met me on his bike and after tending to my feet we cycled the 10 miles home. That evening my aching muscles woke me at 2am demanding attention. As I watched the UCI highlights stretching and massaging my legs doubts about the ultra creeped into my head. How am I going to run twice that distance? I could barely finish the marathon I was in so much pain. My ankles are still too weak, my knees and hips hurt and I could barley move right now. I was extremely hungry and still dehydrated. The marathon made me realise the enormity of what was ahead and I felt tiny in comparison. If I finish the ultra in time and still walking it will be a miracle, but what if I finish with an injury? Would that be worse than not finishing? The next weeks before we leave for Scotland I will recover and build on strength. In Scotland I will work on my hill walking. I do not think my running will get any better in next few weeks, but my strength and confidence can. 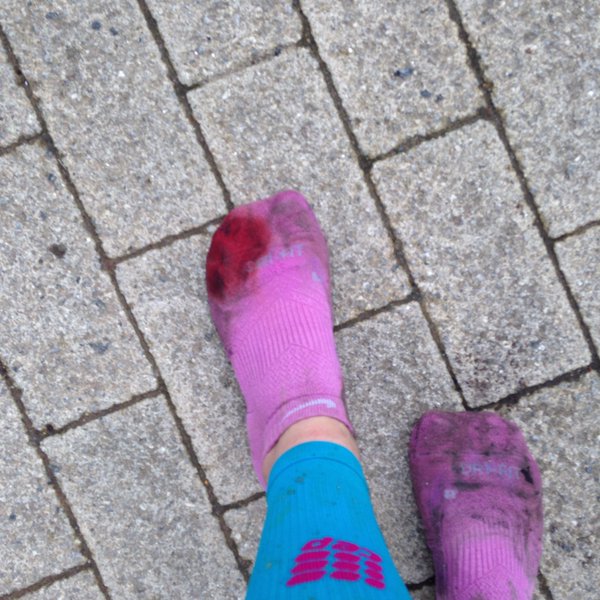 View all posts by wayrunning

This site uses Akismet to reduce spam. Learn how your comment data is processed.